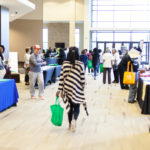 Over 250 members of clergy, city officials, youth, mental health professionals and the community at large enjoyed a full day of sessions that equipped them with tools needed to address mental health in the African-American church.

The primary goal of this conference was to reduce stigmas associated with mental health in the African-American church. According to statistics African-Americans seek professional services as it relates to their mental health at a much lower rate than their white counterparts. “Peeling Back the Layers” sought to educate, equip and enlighten participants in taking care of their mental health well-being. The conference offered multiple tracks, Clergy Track, Youth Track, General Track, Caregivers Track and Justice Track, to streamline the varying needs of the conference attendants. AAFBMH conference opened with a panel discussion, titled “African-Americans and Mental Health: Suffering in Silence.”

Guest panelists included Cynthia James, PhD and DMin, Senior Pastor A.J. Quinton and Deputy Chief Albert Martinez. Paula Dobbs-Wiggins served as moderator. Pastor Quinton shared his lived-experience with mental health, as well as the negative responses he received from the church due to his mental illness. To begin the process of reducing the stigma associated with mental illness in the African-American community, Dr. James suggested that we increase accountability on every level, in our actions and our verbiage. “We need to change the narrative surrounding mental health and find ways that are non- punitive that allows us to safely express our experience,” says Dr. James.

Deputy Chief Martinez continued the dialogue as he delved into the numerous mental health calls that policemen receive.  Unfortunately, many people who lack adequate mental health coverage end up in jail. The good thing is, however, they are able to receive those services while incarcerated once they are diagnosed. “Calling the police for someone who is mentally ill is like spending $5 on a $100 problem,” says Martinez.

Research has shown that in times of emotional distress, African-Americans tend to draw support from their faith, family, and communities. The African-American Faith Based Mental Health Conference helps to dispel myths, increase awareness as well as create a safe space to discuss the church’s role in mental health.

The conference highlight was our keynote speaker, Dr. David Williams who addressed “The Role of the African-American Church in Mental Health.” Dr. Williams used the depression of the prophet Elijah to illustrate how God not only views depression, but also how he deals with it. The audience was not only inspired, but motivated to better equip themselves and those around them to address mental health needs in the church, including church leadership.

Statistics show that forty-six percent of adults in the United States have a psychiatric disorder at some point in their lifetime, with twenty-eight percent experiencing two or more. America is in a mental health crisis. The African-American Faith Based Mental Health Initiative seeks to decrease stigma surrounding mental health in an effort that many will be begin to receive the assistance they need. To learn more about this initiative and to see how you can become involved, visit aafbmh.org.